Showing posts from August, 2017
Show all

The Power of Suggestion

I never pay attention to people that greet me while I'm on the street. By "people" I mean "men", because they are the ones who make it difficult for me to be out in public. So they might say "sawubona, mana", but I ignore it. Even if they said it in passing, to me it's just one more thing that's distracting me from getting to where I want to go. (Also, who is your "mama"?)

Last week, a taxi conductor shouted after me about how he feels cold at night at the hostel. I was disgusted, but I kept walking. It was just another example of how I always have to hear men saying whatever they want about me, my body, and their "needs" when I'm just trying to mind my business. It's part of life.

But this morning's incident was slightly different. As I was walking, a man who was driving past made a gesture at me with his middl…
Post a Comment
Read more

Insecure means so much to me 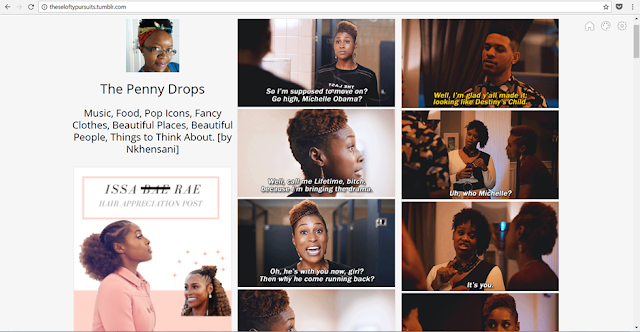 I remember thinking "Yes, it's finally happening!" when I heard that Issa Rae was going to have her own show on TV. That's what everyone in the comments section of The Misadventures of Awkward Black Girl wanted for her, and while I can't give you the direct quote, I believe  Issa wrote about it in her book as well.

Throughout season one, I followed the series and all the opinion pieces, Twitter threads and tumblr posts it generated. I've been doing the same for season two, listening to Insecuritea and An Extraordinary Recap, and tuning into Demetria Lucas D'Oyley's channel to hear people talk about Issa Dee's latest shenanigans.

I was particularly excited to hear what people would say about last night's episode because so much happened. [The rest of this post contains spoilers.]

Issa seems to be hitting her stride in her Hoe Phase
While they wait for Molly to get ready, Issa talks to Kelli about her plans to explore all her op…
Post a Comment
Read more
More posts